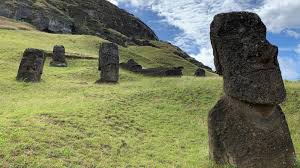 You will find various mysterious places on earth whose mysteries are still big questions. One of the strange places is Easter Island, also known as Rapa Nui Island. It is located in a remote location on earth that Chile governs. It is the central tourist spot for many people. Easter Island has got various statues made up of stone, also known as Moi. According to multiple studies, Rapa Nui people made all figures thousands of years ago. You will find various tourist places in Rapa Nui of Easter Island. It comes under the World Heritage Sites by Unesco.

Some Of The Best Tourist Attractions In Easter Island, Chile

It is a beautiful Island located in the pacific ocean. And it should have a beautiful sea beach where tourists may relax and enjoy the sea surroundings. One such beach on Easter Island is Anakena. It is a unique beach since it has got beautiful white sand and tall palm trees. Seawater appears to be a spectacular blue, green color. If you want to see beautiful Moais, you will find a group called NauNau group, which is quite impressive and brings a beautiful setting in place. Also, it is known to be an essential figure called a king who has a foot on Aneka Beach.

According to various sayings, Moais of Tahai have their back toward the sea, and you won’t find a vast number of Moais to look after either. It is a unique place since it has got a cap-like structure and it has got a beautiful head and eyes which look quite straight at you. You will find a beautiful gap between other groups and the eyes of this Moai. It is the most visited site by tourists.

It one of the beautiful places located near the Airport Runway of Mataveri on Easter Island. It is an exciting place and most discussed archeological tourist site. You will find a massive number of Moais but less in number. Every architecture catches the attention of tourists. Various experts believe it is dated long back like around 1200 AD and resembles the best archeological remains, which are found in Bolivia called Incas. It is some ceremonial place, according to various archeologists. You should visit this site on Easter Island.

It is a strange place with strange statues called Moai but is considered to be one of the main tourist attractions in Easter Island. You will find different sites and places where you may discover moai on Easter Island.

It is difficult to imagine a place in the pacific island where there is no dead or dormant volcano. It has got beautiful long-dead Rano Raraku. You will find it has got a crate which a lake covers. People may visit this place where you will find a massive number of Moais built. Also, there are some remains of Moais too. Most of them are incomplete, and according to historians, it is the quarry or places abandoned a hundred years before.